Charcoal Grey Coat and Dress with Trimmings and Embroidery in Shades of Grey, Angela Kelly Hat

This outfit is another example of how much carefully planning and consideration goes into the Queen's wardrobe choices. In this case, the dress was made to coordinate with two ensambles, to match the tone of two dramatically different events the same day, thus allowing Her Majesty to simply change her coat and hat and quickly achieve a polar opposite feel in her general appearance.

This dress, which appears to be made of a lightweight wool crepe in charcoal grey and is embellished with a central vertical band of trimmings in shades of grey, was first seen on 26 June 2015 for a walkabout in Berlin's Potsdamer Platz on the last day of the Queen's visit to Germany. It was an occasion that called for a bright, highly-visible in the crowd look, and Her Majesty achieved this perfectly with a pale primrose yellow coat and hat (discussed here). The whole look was tied together thanks to charcoal accents on both pieces: 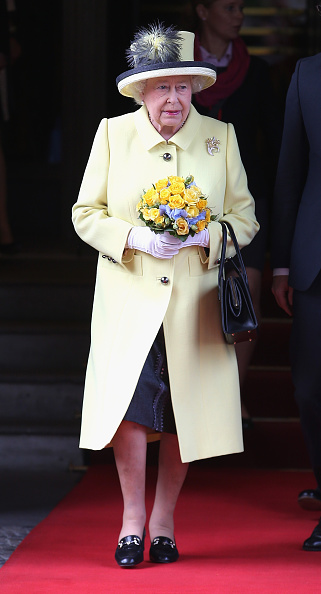 The Queen and the Duke of Edinburgh then departed Berlin on their way to the former concentration camp at Bergen-Belsen. The year 2015 marks the 70th anniversary of the liberation of the camp by British and Canadian troops. This was an altogether more sombre engagement and the Queen was seen disembarking the plane having swapped yellow in favour of a total grey look. Over her grey dress, she had put on a collarless coat in the same fabric, with hidden buttons tonal embellishments that made the piece very interesting. Alongside grey trimmings at the cuffs, pockets and down the centre, the fabric was dotted with minute (embroidered?) squares  that caught the light at different angles, thus providing a lot of movement to the coat (Daily Mail article here).
The look was topped off with a cloche type hat by Angela Kelly, covered in charcoal crepe and ice blue satin and finished with an ice blue ribbon and flat bow around the crown. The Queen also swapped brooches, opting for the delicate Bronte Porcelain one: 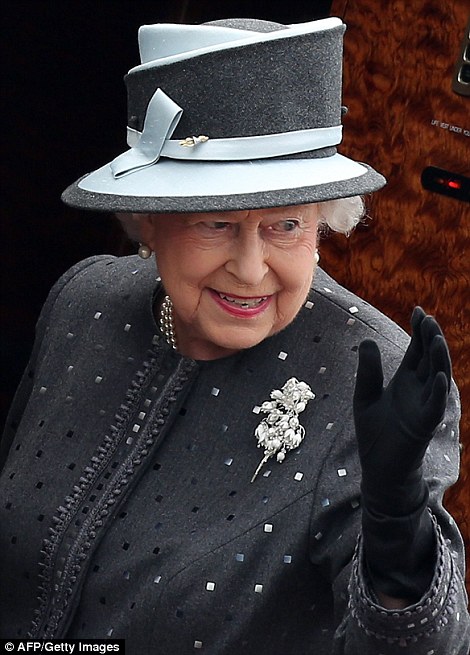 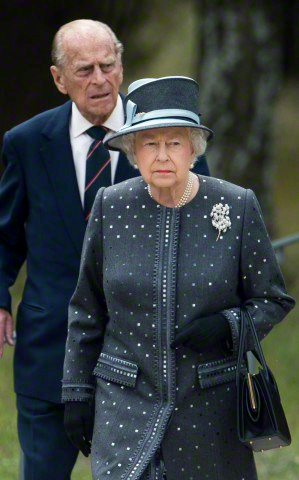 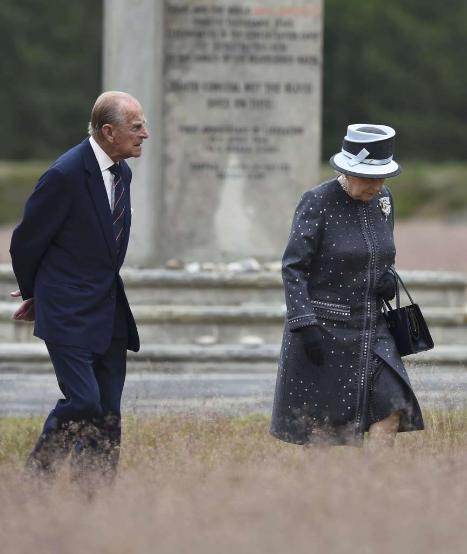 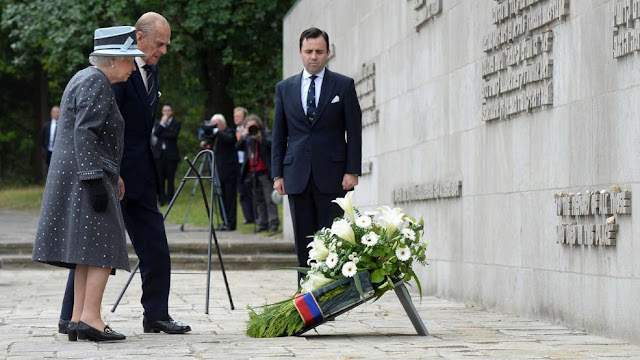 On 8 February 2016, the Queen repeated the all-grey version of the outfit for her train journey from King's Lynn to London at the end of her Christmas holidays at Sandringham (Daily Mail article here). She accessorized with a black fur scarf, Pearl Trefoil brooch and the customary silk scarf she usually selects for this kind of occasion: 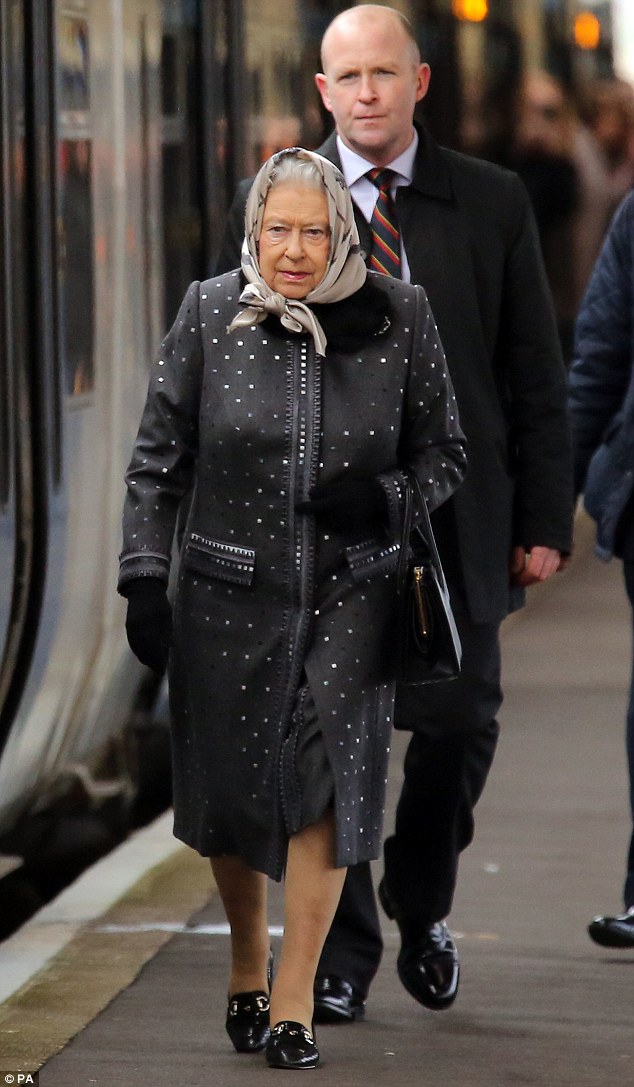 Although the exact date is unconfirmed, it would appear the Queen visited her Royal Ascot Gold Cup winner Estimate's first foal just before leaving Norfolk (Daily Telegraph article here). We know the visit happened in the first week of February and the outfit is exactly the same, down to the same silk scarf: 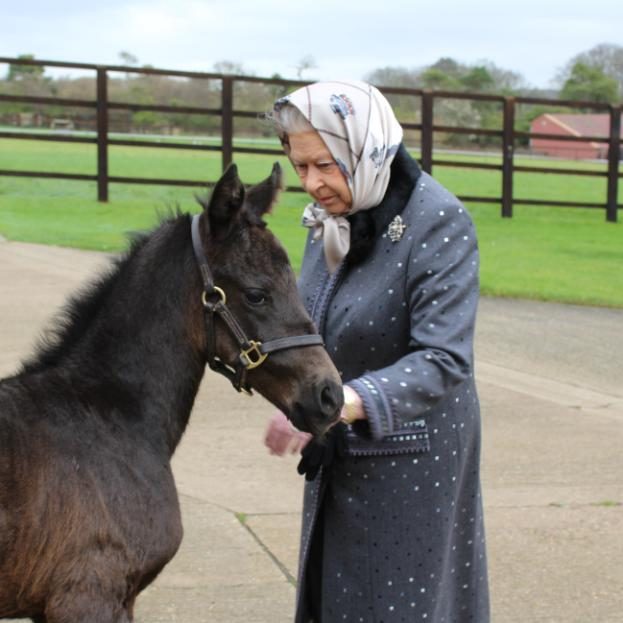 The Queen repeated the whole look on 30 June 2016, to attend a service and vigil at Westminster Abbey to commemorate the centenary of the Battle of the Somme (Daily Mail article here). This time she wore the Cullinan V brooch: 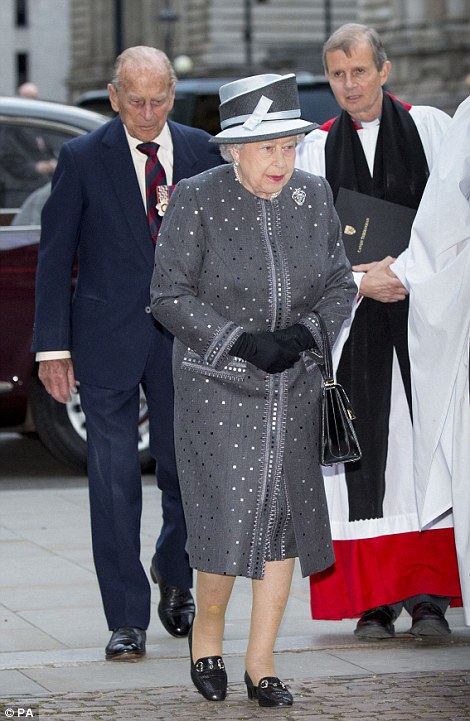 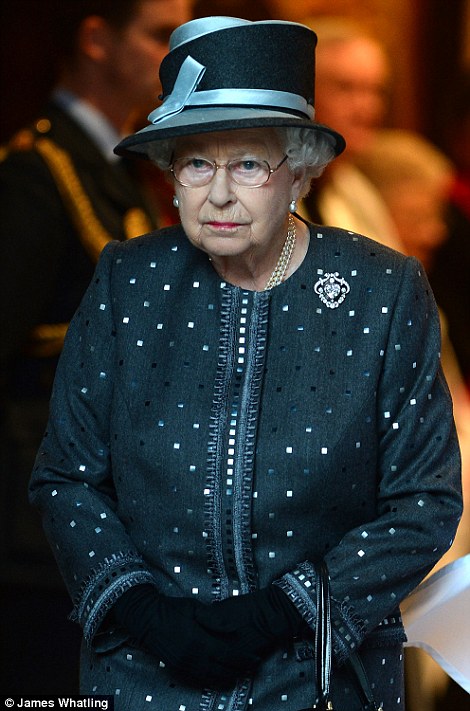 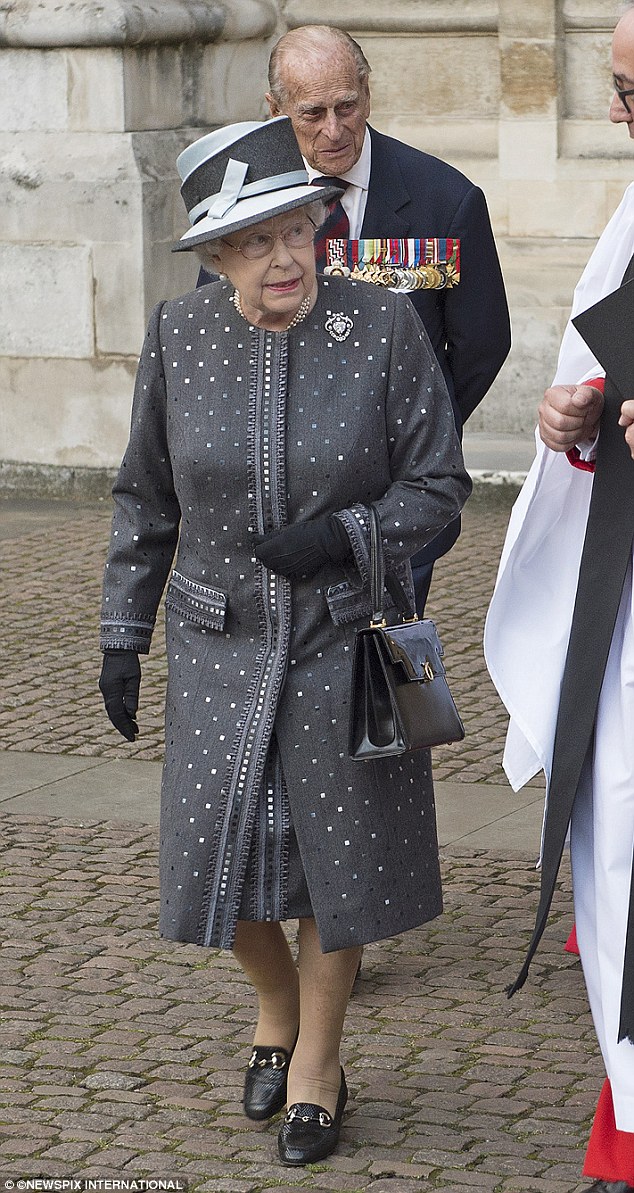 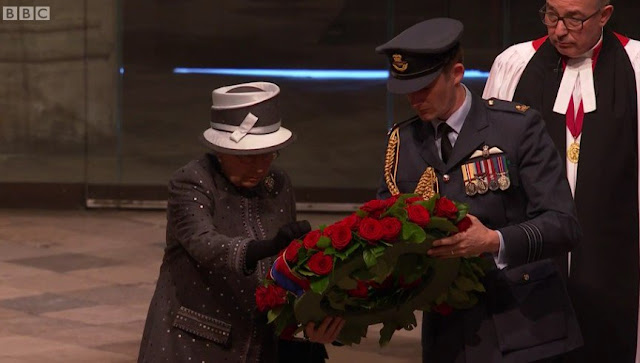 On 13 March 2017, the Queen returned to the outfit's original yellow incarantion and wore it to the annual Commonwealth Day service at Westminster Abbey (Daily Mail article here). She paired it with the Australian wattle brooch: 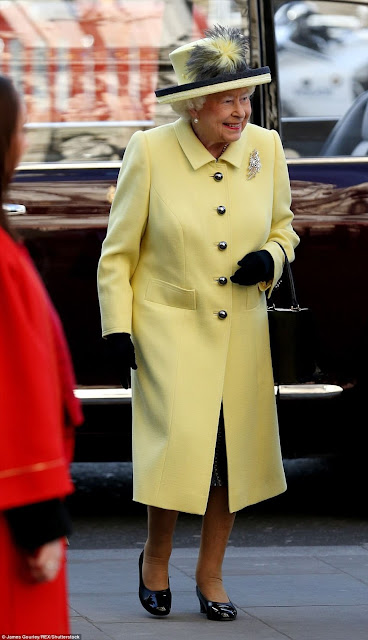